Holi celebrations, also called Holi Festival, Festival of Colors, Festival of Spring and Festival of Love, have been called some of the most colorful festivals in the world. In India, and in countries with large populations of people who follow the Hindu religion, such as Nepal and Pakistan, it’s one of the biggest celebrations of the year. Although Holi is most widely associated with its Hindu origins, it’s also observed by people of other faiths. In fact, Holi events are increasing in popularity throughout the U.S., and the spirit of the celebration is inclusive.

The origins of Holi festivals are ancient. Marked annually by a two-day celebration starting on the vernal equinox, Holi welcomes spring and the promise of a good harvest season. It’s also a time to start new, which for some may mean mending fractured relationships, offering apologies or granting forgiveness, paying past-due debts, and letting go of petty disagreements. For those who observe Holi, it’s a chance to rejoice, play, laugh, sing, dance, and eat special foods and sweet treats.

The rituals and practices of Holi have been shaped by various Hindu stories. Here are two of the most well-known that we see played out in the traditions of Holi celebrations. 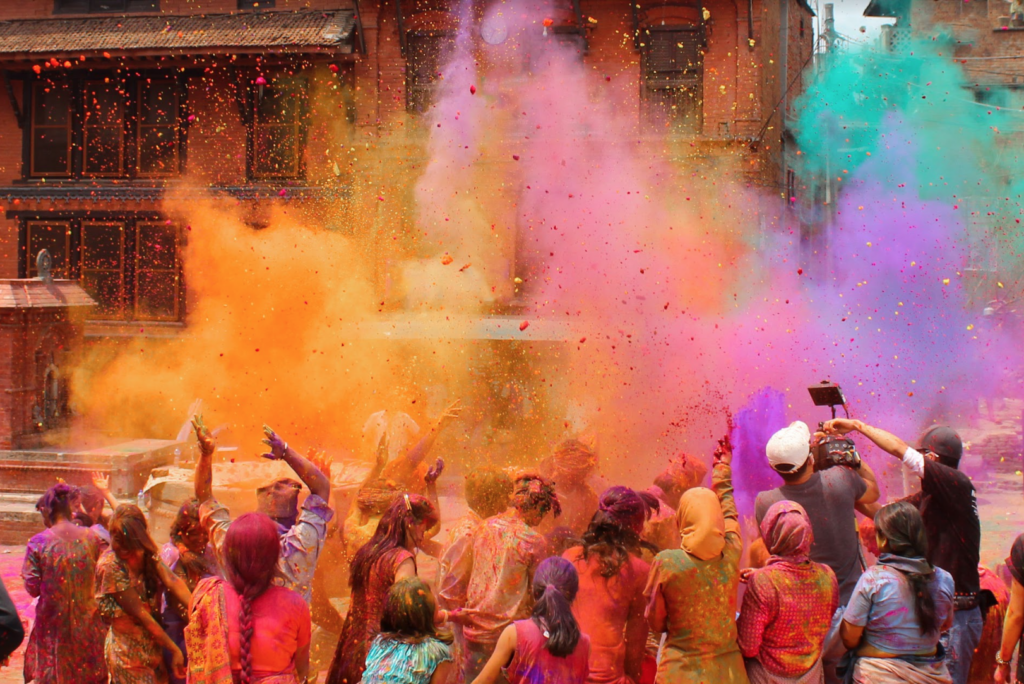 Day 1 – Holika Dahan: How Holi celebrates the triumph of good over evil

For many people of the Hindu faith, Holi commemorates the story of Prahlada, a prince who was dedicated to the worship of Vishnu. Prahlada was the son of a powerful demon king, Hiranyakashyapu, who was jealous and angered over his son’s devotion to the Hindu god Vishnu. When Prahlada refused to worship his father over Lord Vishnu, the king instructed his sister, Holika, to trick the young prince into sitting on her lap in a fiery funeral pyre. Holika possessed powers that protected her from being burned, but because she tried to use her powers for evil rather than good, Vishnu intervened and Prahlada was protected while Holika suffered the fate she intended for the prince.

Day 2 – Rangwali Holi: How Holi celebrates the divine love of Radha and Krishna

Another Hindu story is that of Lord Krishna, the eighth incarnation of Vishnu, and his love for Radha. Embarrassed by his blue skin, Krishna worries that Radha will reject him. At the suggestion of his mother,  Krishna asks Radha to color his face the color of her choosing. She does, and the two become inseparable.

Perhaps the most distinguishing element of the Holi street festivals, people reenact Radha and Krishna’s playful game with an explosion of color. Celebrants throw gulal, a brightly colored powder made from plant extracts, into the air and onto each other. They spread gulal on each other’s cheeks and hair, and spray colored water into the crowds – commemorating the divine love of Radha and Krishna.

How can you be respectful of Holi and those who are celebrating it?

You don’t have to be a practitioner of the Hindu religion to participate in a Holi celebration, but it’s important to be mindful of events that appropriate the color games of Holi without acknowledging their religious and cultural significance and origin.

If you’d like to explore spectacular images of the beautiful festivals of Holi, click here to check out this video by National Geographic. Learn more about the celebration by visiting holifestival.org, and explore other annual commemorations and cultural celebrations by subscribing to the 2023 Diversity Holidays Calendar.

From all of us here at The Diversity Movement, happy Holi!