About a year and a half ago, I noticed one of my friends and colleagues included the pronouns “she/her” in her email signature. I greatly admire and respect this woman, but my immediate reaction was that she was trying to show how “woke” she was—almost that she was trying to make herself look better than everyone else. From my perspective, it was fine that she listed her pronouns, but it just didn’t feel like it was important for me personally to announce my pronouns in my email signature. I didn’t want it to be assumed that I was “woke” or “showy”.

Fast forward to a few months ago when I started working with The Diversity Movement and received the organization’s standard email signature template that included pronouns. It gave me pause at first. Did I really have to list my pronouns? I, of course, was not required to, but I decided that being a representative of The Diversity Movement, I should do it. After all, The Diversity Movement’s mission is to be catalysts for transformation. We ought to lead the way for acceptance of diversity and inclusion. I added my pronouns to my email signature for The Diversity Movement email address (though not to my LinkedIn, Zoom, or my other email addresses). However, I was asked by many clients and partners about the pronouns in my email signature. These questions forced me to revisit my own past and reflect on why sharing pronouns is so important. I am hopeful that my reflection vignettes will help you reflect and potentially shift your perspective as well.

My name, Jamie, is a gender-neutral name. I never liked it when I was growing up. People always assumed that “Jamie” was a boy’s name and I hated that assumption. I had many conversations with my parents about this. Why was I, their youngest of four children, the only one that had a gender-neutral name? Why didn’t they name me “Moriah”, their second-choice name? Why couldn’t I just use my middle name, “Rose”, which was my maternal grandmother’s name? I pleaded with them to let me change my name or go by something else.

By high school and college, I had gotten over my name issues, and I actually started embracing my name. I had met other girls and women who were named “Jamie”. Seeing other “Jamies/Jaymes/Jaimes” made me feel more comfortable that “Jamie” wasn’t just a boy’s name. I also came to celebrate the meaning of my name: “The one who supplants or comes after”. I was born 11 months to the day of my maternal grandmother’s death. My name “Jamie Rose” means that I am the one that comes after “Rose”, which is a special tie to a grandmother I know only through the stories my family tells about her.

During my junior year of college, I studied abroad in Ireland. I am 99.9% sure that I had to list my gender on the school apartment application. Nevertheless, when I showed up to my apartment, I was greeted by my roommates: four other American men. Meanwhile our upstairs neighbor, Andrea, an Italian man, was sharing his apartment with three women. In both instances, whoever was in charge of the applications, assumed that I was a man and that Andrea was a woman because of our names (Jamie is traditionally only a man’s name in Ireland). Andrea and I talked about switching rooms with one another, but we had both already unpacked and I didn’t mind living with guys (besides the sharing a bathroom part).

I graduated from college in 2009, which was not the best year to find a job. I applied to countless jobs. I remember leaving out my middle name and gender on a few online applications just to see if I would get more responses, to see if people assumed I was a man. While I can’t scientifically prove it, it certainly felt like I received a higher response rate when I did this.

At one of my jobs early in my career, I worked with a person who I assumed to be a woman. This colleague shared with me and every other employee in the office in individual meetings that they were transgender, and that moving forward should be referred to as “he/him” instead of “she/her”. He shared in such an open and honest way and encouraged me and anyone else in the company to ask questions to better understand. He also was never upset when we would accidentally slip up and call him “her”. This was my first experience having a transgender colleague and friend. He created a safe space for me to better understand, and I am deeply grateful.

Earlier this year, I was on a Zoom call and was not sure how the other person identified based on their name and appearance. So for the entirety of the call, I just avoided pronouns all together. I did not want to assume and be wrong. Upon reflection, all I needed to do was offer my own pronouns in the introduction and ask everyone on the call to do the same.

Looking back on my own past of having a gender-neutral name, thinking of the story of my friend, and my own experiences of making assumptions and having assumptions made about me, I’m so embarrassed that I didn’t embrace sharing my pronouns sooner in my email signature and social media.

However, I recognize that we are all on a learning journey. One of our core values at The Diversity Movement is “inquisitiveness”—we must all commit to ongoing learning, and more importantly, be able to admit when we have been wrong and change. I have learned that sharing pronouns is not being “woke” or “showy”. Pronouns eliminate assumptions.

By leading with pronouns, you create an environment where everyone can be their authentic self. Just as seeing other “Jamies” made me more comfortable with my name and my identity, using pronouns will make others around you more comfortable with sharing their pronouns and gender identity. It sends a signal to members of the LGBTQ+ community that you are an ally. It’s not enough for members of the LGBTQ+ community to share their pronouns or for members of diversity, equity, and inclusion companies like mine to do so—we all have the responsibility to create an environment of inclusivity and safety in our workplace and our communities.

I encourage you to use pronouns in your email signature and social media as well as starting meetings with new individuals by introducing yourself and then sharing your pronouns. You may feel uncomfortable at first and may question it (as I did), but I am hopeful that sharing my learning journey and perspective may shift your thoughts on using pronouns. I have shared my perspective with clients over the past few months, and I’ve been so heartened recently by being on client Zoom calls where I now see pronouns at the end of names, including executives. Even Apple CEO Tim Cook recently added pronouns to his Twitter account.

Certainly, there is much more to creating an environment of inclusivity or to being an LGBTQ+ ally than just using pronouns. However, this is a significant first step. If you want to learn more about pronouns, MyPronouns.org has great additional resources, and I encourage you to become more inclusive in all of your language by taking our Improving Culture Through Inclusive Language eLearning course. 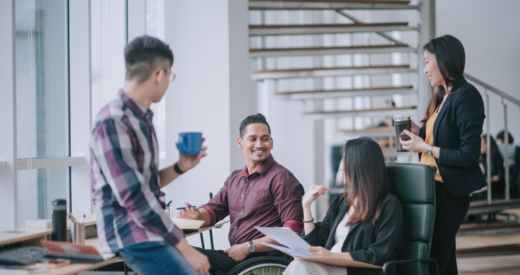